The annual Bayou Boogaloo and Cajun Food Festival brings to Norfolk a New Orleans’ unique food culture which spices things up with the addition of multiple New Orleans chefs that are sure to bring that special spirit to life in Town Point Park.  Such chefs have been featured on television shows like: Anthony Bourdain’s “No Reservations”, Food Network’s highly competitive cooking competition “Chopped”, “Food Paradise” and “The Best Thing I Ever Ate”.  Several chefs have even been participants at the New Orleans Jazz & Heritage Festival in New Orleans, regarded by many as the pinnacle of festival food events!

Festival guests are in for a real treat as they find more than 8,000 pounds of live crawfish straight from Louisiana boiled up with sausage, corn and potatoes throughout the weekend, as well as jambalaya, file gumbo, crawfish and shrimp etouffee, po’ boy sandwiches, alligator sausage, Cajun boudin, and beignets. There will also be unique Chef inspired dishes on site for Bayou guests to indulge in, such as Praline Connections’ beignets and BBQ shrimp. Our on- site cooking demonstrations will get guests’ mouths watering as our Chefs prepare their blends of Cajun & Creole cuisine that are sure to pack a punch. See what goes into their special dishes and take home their techniques so the New Orleans style comes alive in your kitchen. 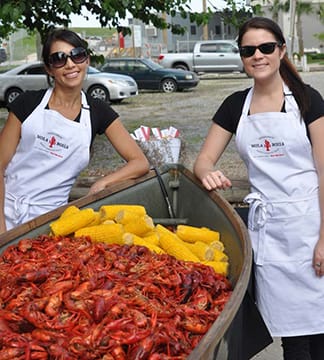 Based in New Orleans, Nola Boils is South Louisiana’s premier catering company. They specialize in the very best on-site seafood boils and provide first-rate local cuisine.  This small team provides large seafood boils and a down to earth NOLA experience. 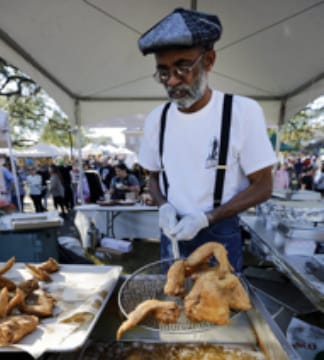 The Praline Connection began as a home delivery service targeting career women who were too busy to prepare home cooked meals for their families.  Curtis opened their first location on Frenchman Street, in New Orleans, LA in 1990 and the rest has been culinary history. The Praline Connection serves "down-home" Cajun Creole style soul food at affordable prices and features three generations of "Pure-D-Goodness". Their New Orleans Pralines are handmade daily in the old fashioned, spoon dripped method, using only the finest ingredients.

Funny thing is Moore knew zip about the industry before strapping on his aprons "Did that scare us? Of course it did," explains his partner, Praline's vice president. "For me to go in a totally different direction was very frightening."  Why the restaurant business? Moore, the company's president, says they found a niche in soul food. In April 1990, Moore retired from BP and traded in his corporate attire for a chef's hat.

Now Moore has an extension of his restaurant in the airport and two candy stores. He also has an online candy store where gift baskets are available for purchase.  This year Curtis Moore is going to be at the 31th Annual French Quarter Festival and be a part of the World’s Largest Jazz Brunch. He has also been known to serve his NOLA cuisine at The New Orleans Jazz and Heritage Festival.

A true New Orleans family recipe turned into a business in 2010 when Kristen Preau, “Jambalaya Girl,” started Cook Me Somethin’ Mister as a new NOLA food brand, packaging her Dad’s recipe for Jambalaya as an easy to make seasoned Jambalaya Rice. Kristen grew up cooking Jambalaya in the large, multi-gallon cast iron pots with her Dad at her brother’s ball games and at events throughout the city. What inspired her to make her Dad’s recipe into the Jambalaya Rice was a result of her response to Hurricane Katrina. Evacuated in Louisville, KY, Kristen and her family took their cast iron pots, traveled the country to college tailgates and served jambalaya to raise money for New Orleans. The fundraiser was wildly successful (over $100,000 raised), but for the fact of how much people LOVED the jambalaya is what got her thinking . . . “could I make a business out of my Dad’s recipe?”

Cook Me Somethin’ Mister Jambalaya Rice is now distributed in six states, including 10 Sam’s Clubs, 5 national foodservice distributors, over 100 grocery stores and specialty stores and online at CookMeSomethinMister.com. Their products are proudly made in New Orleans and are specially blended by Chef Paul Prudhomme’s Magic Seasoning Blends. It is a family business with Kristen, her Dad Paul and her brother Kevin working together. And the “Jambalaya Girl” is represented with a caricature of Kristen wearing her signature fork earrings, printed on hundreds of thousands of bags of Cook Me Somethin’ Mister Jambalaya Rice.

In April 2015, recently named one of the Top 3 finalist for New Orleans Entrepeneur week 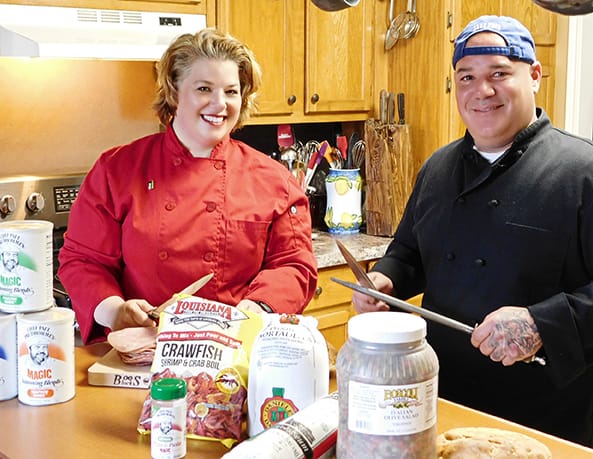 Chef Troy and Ida Brocato are the brother sister duo that makes up Two Italian Cajuns. With roots in South Louisiana and Sicily, they have been surrounded by great cuisine their entire lives. Whether it was making bread with Grandma Brocato or frying fish with Grampa Prudhomme, they learned old school techniques that are still pleasing to the palate today. Chef Troy owned and operated 3 restaurants in New Orleans after working under Chef Paul Prudhomme for 12 years. He has won numerous awards in local competitions. Ida is an award winning cook in her own right, with her delicious bread pudding recipes. Together they are a culinary team who have combined the flavors of old Acadiana and Italy. Two Italian Cajuns...the best of both boots! 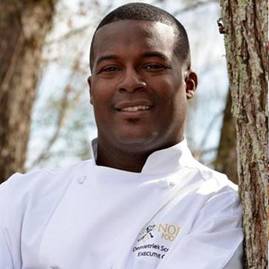 Chef Demietriek Scott, a life-long native of New Orleans is the Executive Chef and Owner of Nola Foods. The road to his culinary career started in 1996 while working with Chef Robert Bruce and Carlos Guia at Palace Café on Canal St where a new appreciation for food was born.

In 2011, Chef Scott opened Nola Foods to provide a historic and cultural neighborhood, Tremé, with a taste of culinary experience that will illustrate down home flavors of New Orleans. Chef Scott’s goal is to create a brand of products and also mentor the youth, informing them of the opportunities they can have as a chef while exceeding the taste buds of many palates.

Down in the 6th Ward Treme you will smell some of the greatest Creole BBQ there is in New Orleans.  Fork tender smoked meats, delicious sides cooked like a TRUE Champion and Chef would!  After nearly 20 years of preparing food, Chef Scott will be serving the best marinated and seasoned, slow smoked for hours incredible mouth savoring food in their 2007 World Champion Award-Winning Custom Smoker.