Located inside Town Point Park is the Armed Forces Memorial and The Homecoming © statue and within steps of the park, visitors will find the Hampton Roads Naval Museum, located on the second floor of Nauticus, the National Maritime Center, the USS Wisconsin and Lone Sailor©. 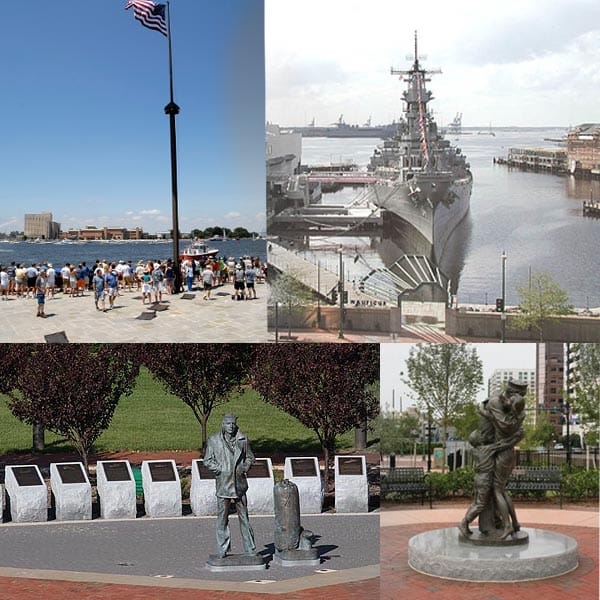 ARMED FORCES MEMORIAL: Located in Town Point Park and on the Elizabeth River, the Armed Forces Memorial in downtown Norfolk is a moving tribute to the service people in the United States who gave up their lives in war. This memorial is a collection of twenty inscriptions of letters written home by soldiers who lost their lives. The sculpture was dedicated on July 4, 1998.

THE HOMECOMING©: A replica of The Homecoming© statue can be found in Norfolk's Town Point Park. Norfolk is considered the Navy's "hometown," and the city is a perfect place for a Homecoming statue to reside. The statue was placed in Town Point Park on October 14, 2000 in honor of Navy families.

USS WISCONSIN: The USS Wisconsin is an Iowa-class battleship, the second ship of the United States Navy to be named in honor of the U.S. state of Wisconsin. She was built at the Philadelphia Naval Shipyard in Philadelphia, Pennsylvania and launched on 7 December 1943, the second anniversary of the Pearl Harbor raid. The USS Wisconsin was struck from the Naval Vessel Register (NVR) 17 March 2006, and is currently berthed in Whisky Basin, next to Nauticus and steps away from Town Point Park in Downtown Norfolk.

LONE SAILOR STATUE©:  The Lone Sailor© statue represents the past, present and future Navy bluejacket - adventurous, independent, courageous, self-reliant, and resourceful. His authentic image evokes the lure and romance of service at sea. The dedication of The Lone Sailor© statue occurred on May 25, 2002 in Norfolk. The statue is on Wisconsin Square facing the bridge of the Battleship USS Wisconsin. Because Norfolk is the home of the U.S. Atlantic Fleet, it serves as a natural home for The Lone Sailor©. The Norfolk statue is surrounded by eight bronze commemorative plaques of Norfolk-based ships and submarines that have met with tragedy - and one plaque that recalls the 9/11 terrorist attack on the Pentagon. The plaques are: USS Cole, USS Forrestal, USS Iowa, USS Liberty, USS Nimitz, USS Newport News, USS Scorpion, and The Pentagon.  The Norfolk Lone Sailor©, and its moving site were donated by "Friends of the United States Navy Memorial" - made up of hundreds of individuals and local organizations that pledged their support.