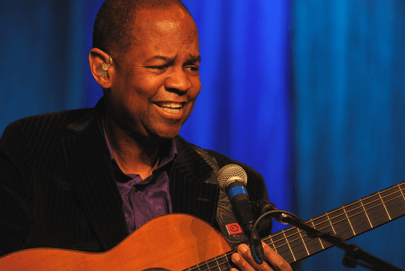 Raised in the exciting cauldron of Motor City music, Earl Klugh absorbed a wide spectrum of influences from Atkins and Wes Montgomery to Sergio Mendes, Laurindo Almeida and guitar music from Brazil, Argentina and Spain. The pop tunes of Burt Bacharach and the Beatles, as well as The Funk Brothers, Motown’s legendary studio-session band, were also part of the mix, along with the lyrical jazz piano of Bill Evans.  As a composer and songwriter, Earl Klugh's credit appears on a wide range of recordings from artists such as Aretha Franklin, Jamie Foxx, Roberta Flack, Mary J. Blige, Kenny Loggins, Al Jarreau and many others. And he has been a guest artist with musicians from Buffett, Loggins, Brenda Russell and Stevie Wonder to jazz masters Miles Davis and McCoy Tyner.

When it comes to films, Klugh’s guitar is on the soundtrack scores of How to Beat the High Cost of Living, Marvin and Tige and Just Between Friends. CBS Golf embraced Klugh’s “Take it From the Top” as their theme song for many years of exciting coverage of the sport.  And moving from the silver screen to television, he has performed on such iconic shows as The Tonight Show, Late Night featuring David Letterman, The Today Show and Good Morning America. In addition to his 13 GRAMMY® nominations and his GRAMMY® statue for the million-selling album,One on One, with Bob James, Klugh also won the 1987 Edison Award (the European equivalent to the GRAMMY®) for Life Stories and his 1987 disc with George Benson, Collaboration, was certified Gold by the RIAA. His latest three releases, Naked Guitar (2005),The Spice of Life (2008) and HandPicked (2013) went back-to-back-to-back as GRAMMY® nominees for Best Pop Instrumental Album.

Whether he is performing in a solo context, with his quartet, with his electric band, with his ‘Little Big Band” or with renowned symphony orchestras, Klugh is a master alchemist, turning nylon strings into pure musical gold. So forget the labels and just let the emotions flow while enjoying the sounds of Earl Klugh.