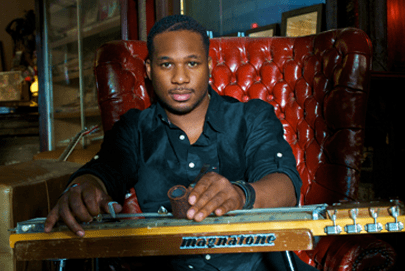 Robert Randolph and The Family Band

When Robert Randolph talks about his new album, Lickety Split, a few words come up over and over—”joy,” “freedom,” “energy.” Which is no surprise, really, because those are the same things that immediately spring into a listener’s mind when these twelve tracks from the virtuoso pedal steel guitarist and his longtime accompanists, the Family Band, explode out of the speakers.

“My thing is really upbeat, uptempo, with great guitar riffs,” says Randolph, summarizing his musical ambitions, “but also catchy choruses and lyrics that someday will make this music into classic tunes.”

“Robert Randolph is an American Original,” says Don Was, President of Randolph’s new label, Blue Note Records. “He has mastered what is, arguably, the most complex instrument in the world and developed a unique voice that is equal parts street-corner church and Bonnaroo. This album finally captures the energy and excitement of his legendary live performances.”

But for Randolph, the road to Lickety Split—his first studio recording in three years—wasn’t an easy path. Though his distinctive mix of rock, funk, and rhythm & blues continued to earn a rapturous response from a fervent, international audience, he felt that he had lost some of the enthusiasm and intensity that had driven him to make music in the first place.

“We just weren’t being creative musically,” he says. “Being on the road 280 days a year, you wind up playing too much and it isn’t fun anymore. Soon, you stop being that concerned about how good you can be, how important it is to create and write. You kind of lose sight of that, of being focused on your craft and spending time with your instrument. I’ve become more in love with my guitar now, and staying relaxed and practicing and trying to create different sounds.”

Randolph notes that the title track of Lickety Split (on which his sister sings the hook) is one of his favorites. “What’s great about that one is that it’s something we actually played in church, just like that,” he says. “There’s a section in the service called the ‘Jubilee Jam Session Time,’ and I can show you video where we played that very same riff.”

But if there’s one track on the album that captures the band’s new spirit, it’s one that started as a jam session in a Nashville studio during a break in recording, and later came to be titled “Born Again.” “It’s about finding the joy again,” says Randolph. “At first it was more of a love song, the sense you get when you find the right person, but then as we were recording this new music with a whole new sense of direction, and feeling free again, that all came into it. It’s not a religious thing, it’s just new energy—which is really the old energy that I had at the beginning of my career.”

Robert Randolph & The Family Band first gained national attention with the release of the album Live at the Wetlands in 2002. The band followed with three studio recordings over the next eight years—Unclassified, Colorblind, and We Walk This Road—which, together with tireless touring and unforgettable performances at such festivals as Bonnaroo, Austin City Limits, and the New Orleans Jazz and Heritage Festival, won them an expanding and passionate fan base. Randolph’s unprecedented prowess on his instrument garnered him a spot on Rolling Stone’s “100 Greatest Guitarists of All Time” list, and also attracted the attention of such giants as Eric Clapton and Carlos Santana, who have collaborated with him on stage and in the studio.

“What I’ve learned from being around those guys—and you never really notice it until the moment is away from you—is that it’s really important to them that someone keeps original music going, that you’re not just trying to be like everybody else,” he says. “Eric really wants to know what’s going on now, he’s always going ‘Show me that lick again!’—they’re like little kids, and that’s really the great part about it. It makes me think that I need to keep getting better, to stay excited and keep trying to be innovative and keep growing.”

Most recently, Randolph has attempted to amplify the tradition from which he came by executive producing the Robert Randolph Presents the Slide Brothers album, a recording which features some of the older “sacred steel” players from the House of God church who inspired him to pick up an instrument. “This is part of my whole story, which a lot of people don’t understand,” he says. “In our church organization, playing lap steel in church has been going on since the 1920s. These guys were my mentors, my Muddy Waters and B.B. Kings. Thinking that I started this style is like saying Stevie Ray Vaughan was the first guy to play the blues. I wanted to do this record so that everybody could understand the story and start connecting the dots.”

He is also taking a bold new step by remodeling an abandoned school building in his hometown of Irvington, New Jersey and opening the Robert Randolph Music and Arts Program. “There hasn’t been any arts in the schools, period, since I was in high school,” he says. “So my whole motivation changed to a full-on effort to get these kids into music, and also find out what other passions they have and try to offer that. These kids don’t have anything to do, they don’t have any hope.”

With a new label, a new dedication to his craft, and a new sense of responsibility in his life off-stage, it seems like Lickety Split might also represent the urgency Robert Randolph is bringing to all of his efforts these days. “I’m still undiscovered, and that’s really the best thing about it,” he says. “Now we have the chance to present the music right, and have the story told right, and for me to be focused on being an ambassador for inner-city kids and a role model, and also an ambassador for my instrument and as an artist. As all these things happened, it got fun again.”