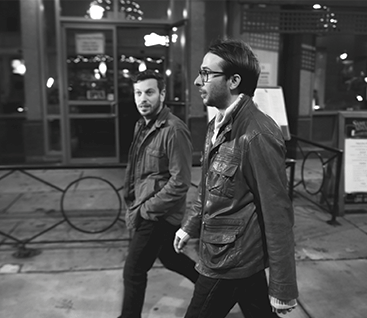 Broken Into Better Shape finds Good Old War pushing their musical boundaries to the limit.  Road-weary from two years at sea, the trio set out to write an album full of songs that were not limited to sounding perfect in a live experience.  They bunkered down in Goodwin’s toddler-toy-filled house and struggled for half a year to find what they were looking for.  Around this time, drummer Tim Arnold left the band for Atlanta, where his fiancé was pregnant with their first child.  Arnold’s DNA remains in the band and his fingerprints are still present as a writer on some of the tracks on the record.

With half of the album’s songs now written, Goodwin and Schwartz began experimenting with other writers and producers.  In New York City, they dreamed up the ultra-inspirational “Fly Away” with writer Emile Haynie (fun., Bruno Mars).  A trip to Los Angeles found them improbably paired in a writing session with Zimbabwe-born urban producer T-Collar, where a hook was crafted that the band were eager to take to the studio.  It would become their first single, “Tell Me What You Want From Me.”

Broken Into Better Shape became the record that it is in Nashville, where the band wrote and rounded out songs with producer Jason Lehning (Alison Krause & Union Station, Mat Kearney, Dolly Parton) and with the aid of a terrific group of musicians and writers.  Whereas much of the band’s earlier work had been written individually, this album would end up being a grand collaboration.

The result is the band’s proudest moment, an album of lush, well-crafted songs with no filler, ten songs whittled down from a pool of over forty.  April 2015 will find the band touring for the first time in three years, reunited with drummer Tim Arnold, who’s traded changing diapers for continuing to be a touring member of the band.