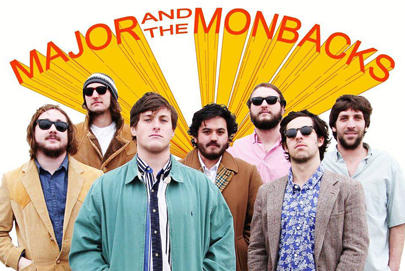 Hailing from Norfolk, VA, Major and the Monbacks have revived the energy and grit of southern soul, blending this old school style with “60’s infused southern twang” that stirs dreamlike visions of Otis Redding and Chuck Berry playing a beer soaked fraternity party. With a full 8-piece ensemble, including 3 vocalists, a hypeman, and a lively horn section, the Monbacks have “[nailed] what it used to mean to be an American band”. Drawing comparisons to artists both old and new, the Monbacks have created their own blend of high-energy rock n roll that “takes the old and makes it new again”.

Founded by twin brothers Neal and Cole Friedman with a group of high school friends, Michael Adkins, Harry Schloeder, and Tyler West, in 2008, The Monbacks have grown into a full time touring machine, hitting the road up and down the East Coast of the United States with dates from Burlington, VT down to Muscle Shoals, AL. The Monbacks have made a name for themselves with their raucous live shows, bringing a full-fledged party to the stage. However, with the addition of Nate Sacks on the saxophone and most recently Bryan Adkins on the drums, the Monbacks have solidified their already powerful lineup and are gearing up for the band's debut full length album due out in Spring 2015.