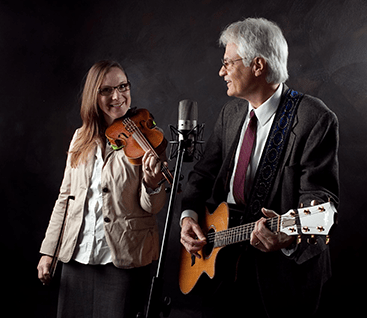 The seeds of Mountaintide were sown when multi-instrumentalist singer-songwriters Jim Newsom and Holly Bishop met in 2014 and began playing music together around southeastern Virginia. Their telepathic musical connection was obvious from the beginning.

Born in the Black Hills of South Dakota, Holly Bishop spent her teen years in Salt Lake City where she developed her multi-instrumental talents on violin, guitar and piano. She graduated from Belmont University in Nashville with a degree in Music Business, and remained in Music City writing and performing there until relocating to Norfolk in 2005. Well established as a music teacher and composer, she began attending local singer-songwriter nights, reigniting her passion as a creative artist. She was a finalist in the 2015 Sea Level Singer-Songwriter Festival Emerging Artist Contest. For her “day job,” Holly runs a music program for pre-schoolers called Little Rock Stars in Norfolk, Chesapeake and Virginia Beach.

Jim Newsom is well known regionally. He’s been a popular musician since the mid 1970s and has released three CDs. He is a highly regarded music writer and critic whose work has been published in the All Music Guide, PortFolio Weekly and VEER Magazine among many print and online publications; and he has been “the guy on WHRO” for over 30 years. He first played music as a youngster after picking up the basics from his sister’s piano lesson books. He subsequently drove his parents crazy banging out rock and roll on the family’s living room piano. In high school, he bought a flute for $25.00 from a girlfriend in the marching band, and taught himself to play by listening to the recordings of Herbie Mann and Jethro Tull. He learned guitar from a Bob Dylan songbook. He’s led rock, jazz and acoustic bands and is an award winning songwriter.

Looking for a succinct description of the duo’s music, Holly coined the phrase “soulfolk,” an apt label for their musical blend. Recalling influences from the folk era and singer-songwriter genre to the classic soul music of Motown and Memphis with touches of rock, jazz and bluegrass thrown in for seasoning, Mountaintide’s harmonic stew is tasty and invigorating.

Mountaintide’s first album is scheduled for release in June, 2015.