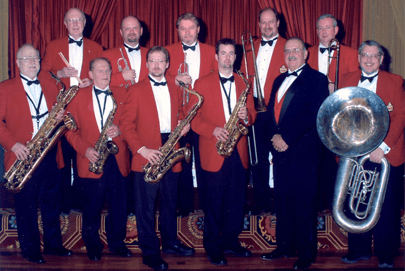 Countless people remember with nostalgia the tradition of Guy Lombardo with his Royal Canadians playing at New York City's Waldorf Astoria on New Year's Eve.  Since the death of Lombardo in 1977, the playing of Auld Lang Syne at the stroke of midnight has become a tradition as it is performed by various bands before enthusiastic audiences throughout the world.

Since picking up the Lombardo baton, Pierson has gained ever-greater acclaim throughout the continental U.S. and Canada for his re-creation of the sound of Guy Lombardo's original band.  Mr. Pierson was broadcast weekly on PBS in many of America's cities and towns for a number of years.  Pierson is known by his fans and associates as Mr. Personality and somewhat in a class with Liberace and Victor Borge.  Pierson has been named in Who's Who is Entertainment.  He has also been nominated to the highest acclaimed of all "Who's Who in the World".