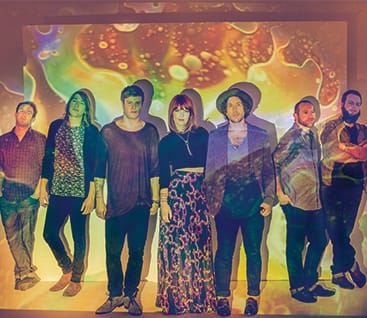 Love is all you need. It's been said many times and many ways of course, but it's truer now than ever.

When The Mowgli's first landed on the scene, their message of positivity and love resonated with audiences everywhere. The group's 2013 major label debut, "Waiting for the Dawn" [Photo Finish], debuted at #4 on the Billboard Heatseekers Chart and yielded the hit "San Francisco." Following its release, the seven-piece -- Colin Louis Dieden [vocals, guitar], Katie Jayne Earl [vocals, percussion], Dave Appelbaum [keyboards], Josh Hogan [guitar, vocals], Matthew Di Panni [bass], Spencer Trent [guitar, vocals], and Andy Warren [drums] -- performed on Jimmy Kimmel LIVE!, The Tonight Show with Jay Leno, CONAN, Watch What Happens Live, and more. Between headline tours and runs supporting everybody from Walk The Moon to Manchester Orchestra, they even cut a song for the Relativity Media hit film "Earth To Echo." Along the way, their interpretation of love became even clearer, and it defines their sophomore outing, "Kids In Love."