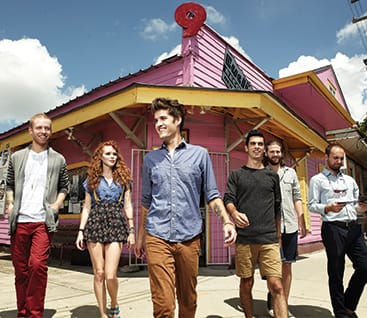 If all music tells a story, then Royal Teeth's joyous, inspired songs spin an exuberant tale of possibility, each note conveying the youthful excitement of venturing out into the great wide world. The songs on the band's debut album, "Glow," were penned around the idea of exploration and spirited adventures into the unknown, and its 12 tracks lay out a kaleidoscopic narrative of discovery.

The group came together in 2010 with Gary, Josh W, Poe, Josh H and Stevie, friends from all across Louisiana who'd gravitated to one another during their early days playing out in New Orleans. It was with the discovery of Nora, the last piece of the puzzle, that the band began to truly hone in on what would become their sound. The aim was to have fun, with no master plan for the music at the outset. As they began to experiment, it became clear that the synthesizers they'd been playing around with elevated their effusive indie pop songs and best conveyed the buoyance and levity of being young and anxious for the world to open up for you.