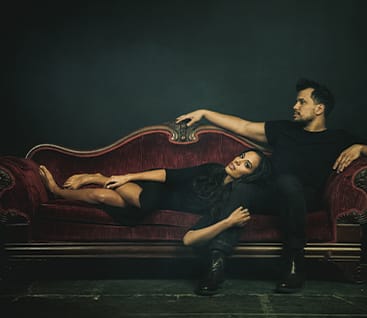 There are approximately 2,000 miles between Nashville and Los Angeles. Both cities are home to JOHNNYSWIM. However, the duo's music far transcends that distance. It's easy to understand why A Prairie Home Companion declared that Abner Ramirez and Amanda Sudano Ramirez are "21st century troubadours." As JOHNNYSWIM, they embody the tradition of the well-traveled singer-songwriter while cultivating a modern style that's uniquely their own.

Heart Beats, the duo's debut for Big Picnic Records, is the culmination of years spent shaping what Vogue calls an "infectious sound." Of the 200-plus acts who performed at the 2013 Bonnaroo festival, only JOHNNYSWIM could naturally conjure elements of rock, blues, boleros, folk, and contemporary R&B in their music. With just a guitar and the scintillating contrast of their voices, the duo holds audiences spellbound. They are storytellers who create a sense of intimacy between them and the listener, whether performing on The Today Show, singing 333 feet underground in Tennessee's Cumberland Caverns, or illuminating the stage at O2 Shepherd's Bush Empire in London. Their songs are shaped by universal truths. "It starts with a feeling we hope the listener will get when they hear the song," explains Abner about their songwriting process. "Sometimes it starts with a lyric, sometimes with a chord progression, or sometimes even with a picture, but ultimately we start with an emotion."

Abner and Amanda formed JOHNNYSWIM in Music City, USA. The son of immigrants who fled Cuba for the southeast, Abner had moved to Nashville to study and pursue music while Amanda's family settled in Nashville after moving between Los Angeles and the northeast. Both inherited strong musical influences from their parents and both were driven by a desire to chart their own path in music. Abner attempted a solo career with a record label and Amanda had done some recording in New York but neither course was creatively satisfying. And then they met each other in 2005.