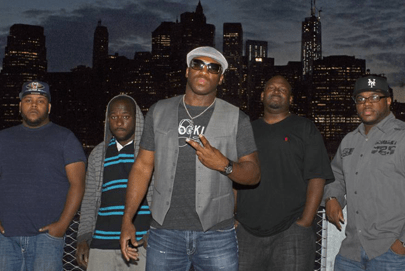 Hailing from New Orleans as the former trombone player of the Dirty Dozen Brass Band, Big Sam always entertains audiences with his exhilarating brand of high-voltage funk, rock, jazz, and hip-hop, termed “Noladelic Powerfunk.” The San Francisco Chronicle asserts “[Big Sam is] the top man on the slide trombone in the birthplace of jazz.”

Accompanying Big Sam are Andrew Baham on Trumpet/Vocals, Joshua Connelly on Guitar, Chocolate MILK on Drums and Jerry Henderson p/k/a Jblakk on Bass. Together, BIG SAM’S FUNKY NATION engages and delights audiences across the country with their high energy performance and showmanship. Big Sam’s Funky Nation has wowed crowds at major festivals and events, including the New Orleans Jazz and Heritage Festival, Bonnaroo, Austin City Limits, Gathering of the Vibes, Monterey Jazz Festival, Jam Cruise and countless others. According to the Associated Press, “Big Sam’s Funky Nation, one of New Orleans’ most energetic brass bands, had a crowd of thousands on its feet at the New Orleans Jazz and Heritage Festival.” BSFN has also been featured on "LIVE! with Regis & Kelly," and more recently, in HBO's original series, "Treme," where the band performs one of their songs for a Mardi Gras event, and Big Sam plays himself in multiple episodes, including scenes with Elvis Costello and Allen Toussaint as they recorded the acclaimed Grammy-nominated album, River in Reverse.

Though the band is continuously on the road, playing major music festivals and venues nationwide and abroad, BIG SAM’S FUNKY NATION is also available for private engagements such as weddings, campus events, and corporate functions. A Big Sam show is one not to be missed, and one that your audience will talk about for ages to come.