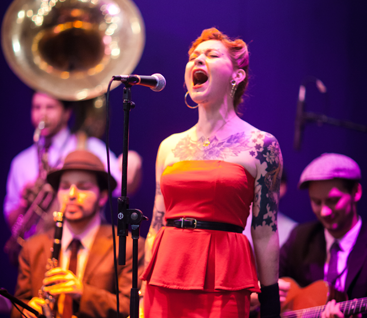 As a young performance artist, Meschiya Lake began her career as an entertainer touring with a circus troupe and conducting daring sideshow acts. During a stop in New Orleans, she fell in love with the equally whimsical city and it is here where her nomadic tendencies ended. Frequenting the sequestered part of Royal in the French Quarter for street musicians, Meschiya began singing with the traditional New Orleans jazz band, The Loose Marbles and soon after they embarked on a European tour. Following her time with the Marbles, Meschiya along with singer Erika Lewis, started the ambient duo Magnolia Beacon and took to the streets of Europe once again. Now she croons over The Little Big Horns at three regular weekly gigs, rejuvenating jazz throughout New Orleans.