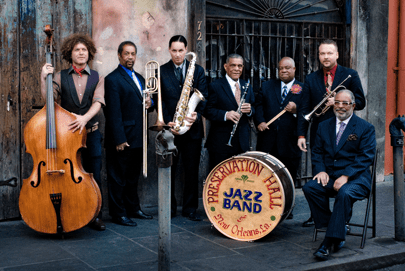 Preservation Hall was founded in 1961 to promote traditional New Orleans jazz in all its authenticity. Legendary players like George Lewis, Sweet Emma Barrett and Kid Thomas Valentine, all rooted in the formative years jazz, were its original stars. That generation is long gone now, yet the hall is still in business and the Preservation Hall Jazz Band continues to tour the world.

Therein lies a paradox: how does an institution based on an early 20th century musical culture prosper in the 21st? When asked that question on the occasion of the Hall’s 50th anniversary, Creative Director Ben Jaffe had a ready answer: “This anniversary is about the next fifty years.”

For Jaffe, 41, this not just a business question: he’s carrying on a family tradition started by his parents, Allan and Sandra Jaffe, who were instrumental in founding the Hall and turning it into an internationally known cultural icon. When Ben took over the operation in 1995, he faced the challenge of keeping it going with a dwindling band of veteran musicians and an aging audience base. His solution has been to inject the touring band with new blood, bringing in some younger players with fresh musical ideas and to form collaborations with groups and musicians from outside the New Orleans tradition. In recent years, the PHJB has performed and recorded with a wide array of musicians, ranging from groups like My Morning Jacket, Tom Waits, Merle Haggard, Pete Seeger, and the Del McCoury Bluegrass Band. The culmination of this collaborative effort was the sellout 50th anniversary concert that the PHJB hosted at Carnegie Hall in January 2012.

This album breaks new ground for Ben and the PHJB: it’s the first time in the history of the band that it has recorded an album made up of entirely original material—most of it composed by Jaffe and members of his group. The album was co-produced by Ben Jaffe and Jim James, leader of My Morning Jacket, and encouraged by songwriters Paul Williams, Dan Wilson and Chris Stapleton, who co-wrote three of the titles with the band. Band members Charlie Gabriel, Rickie Monie, and Clint Maedgen also pitched in on some of the compositions.

Once the material was written and rehearsed, Jim James and his sound engineer Kevin Ratterman drove down from Louisville with a van full of equipment and set it up among the splintery wooden benches and smoky paintings in Preservation Hall. That recording session produced the eleven tracks on this historic album.

Though it was not unheard of in the past for Preservation Hall musicians to compose some of the music they performed—drummer Paul Barbarin wrote “Bourbon Street Parade” and clarinetist George Lewis wrote “Burgundy Street Blues,” for example—this album marks the first time that a substantial body of new music was created by the band and entered the Preservation Hall repertoire. This constitutes a rich lode of fresh material not only for the current members of the touring PHJB, but also for other musicians who play at the hall and may be inspired to pick up on some of these songs. In the heyday of the Jazz Age, New Orleans musicians learned new tunes all the time by listening to what their peers were doing in the dance halls and on their recordings. One of the aims of this album is to stimulate that kind of cross-pollination among today’s New Orleans jazzmen.

Though some traditional jazz purists may be surprised, the broader public will hopefully find this music engaging, enthralling—and irresistibly danceable. No one who hears Jaffe’s funky tuba lines, Joe Lastie’s backbeat drumming and the band’s groove on tunes like “The Darker it Gets” could doubt the group’s traditional New Orleans roots.

On the other hand, Clint Maedgen’s boozy “August Nights,” with it’s haunting tenor sax riffs and sultry muted trumpet work by Mark Braud, is a Tom Waits-like hymn to urban despair that would be at home on any barroom jukebox in the world. The punchy horn-section riffs on “Come With Me” and “That’s It” have a bite and exuberance that recall the Ellington big band sound. “I Think I Love You,” is a pop tune with a Caribbean beat and a smooth, sexy vocal by 80-year-old reedman Charlie Gabriel (with Jim James singing backup).

In addition to Gabriel, Ronell Johnson (“Dear Lord Give Me the Strength,” “Halfway Right, Halfway Wrong”) and Fred Lonzo (“Rattlin’ Bones”) turn in strong vocal performances that underscore the wide variety of talent this band embraces.

Not if Ben Jaffe can help it. “My parents were never preservationists in any strict sense,” he says. “They simply presented the music the way the old jazzmen wanted to play it. This is the music we want to play today. We’ll continue to do the old standards, along with new material that allows us to be creative and relevant. With this album, I wanted to do something that would challenge us and make us proud.” That’s it.