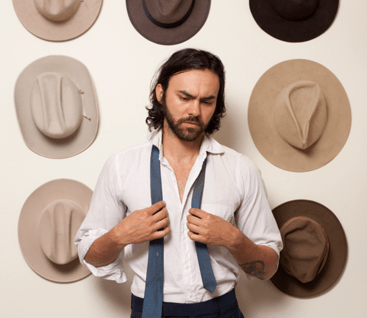 Rose-Garcia is professionally known as Shakey Graves, and with his new record, "And the War Came," he extends the ground -- emotionally and sonically -- broken by his 2011 self-released debut album, "Roll the Bones," which brought him national acclaim and, three years later, still ranks near the top of Bandcamp's digital best-seller charts.

"Roll the Bones" established the powerful, mesmerizing Shakey Graves sound of Rose-Garcia accompanying himself on guitar and a handmade kick drum built out of an old suitcase. NPR Music named him one of 10 artists music fans "should've known in 2012," describing him as "astonishing...unclassifiably original. And frighteningly good." Paste included him in a "Best of What's Next" feature, praising his "gnarly composite of blues and folk," while The New York Times observed that Shakey Graves "makes the one-man band approach look effortless.

But while this distinctive arrangement continued to earn him an ever-expanding fan base on the road, Rose-Garcia knew that he wanted the follow-up to achieve something different. "With the first album, I didn't have any expectations except my own," he says. "This time, I was making something people were going to listen to out of the gate. I tried to maintain everything I enjoy about recording, the weird homemade aspect, but I was seeking a new, shining sound quality. The concepts for the songs are a little bigger. This is not the 'Mr, Folk, Hobo Mountain' album -- it's more of the Cyborg Shakey Graves. It's definitely the next step in the staircase."

To record "And the War Came," co-producer/collaborator Chris Boosahda brought all of his gear to Rose-Garcia's house and converted the space into a big, open studio. Though the signature Shakey Graves set-up remained the starting point, other instrumentalists came in and multiple, wildly different arrangements of the songs were attempted for what was initially planned as a double album.

The themes of these ten songs, explains Rose-Garcia, return over and over to the idea of the "other." "It's not about any single person, it's about being that second, other person. Even the title -- I never thought about whether I was able to handle that aspect of things, of having these relationships. 'And the War Came' is a little bit of, be careful what you wish for."

While his remarkable success story continues to unfold, Alejandro Rose-Garcia sees "And the War Came" as a pivotal step in the evolution of Shakey Graves. "This is a doorframe album, as we're going into a new building," he says. "It's taste of everything -- what might come in future, which might include just guitar or the one-man band thing, but not pigeonholed to any one sound. I wanted to open some stuff up and get people ready for wherever it's going."