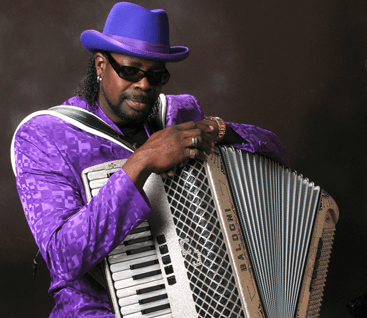 C.J. Chenier talks a lot about energy. Ask him why he recorded a certain song and he’ll tell you he likes the energy of it. Why does he love zydeco music? It’s the energy. And so it should come as no surprise that C.J.’s new album, Can’t Sit Down (World Village, Street Date – September 13, 2011) is so jam-packed with energy it could power a small city!

Recorded live in one session at Rock Romano’s Red Shack Studio in Houston, Texas, Can’t SitDown is all about truth in advertising: give it a spin and watch your feet get to work whetheryou want them to or not. C.J.—whose father was the late Clifton Chenier, perhaps the mostcelebrated zydeco musician in the genre’s history—cut the album live in the studio quicklyin order to capture the freshness—the energy— of the material. For that reason, he dispensed with a producer, opting to handle the task himself. “I figured that nobody knows better what I want than I do,” he says. “Nobody knows better how I want my accordion to sound. Nobody knows better how I want my band to sound. So I decided to stop going with other people’s ears and start going with my own.”

The 11 tracks on Can’t Sit Down are among the most potent of C.J.’s long career, starting with the album-opening title track, written by Clifton. “I play that song pretty much how I played it with my daddy,” C.J. says. “I really liked it so I said, ‘OK, let’s try this one,’ and everybody fell right in. It just clicked. That’s a sign that something is a keeper, when everybody can fall in and it feels good.”

“Hot Tamale Baby” is the other Clifton-penned tune on the album, and then there’s “Paper In My Shoe,” a song written by Boozoo Chavis and Eddie Shuler and usually credited as the first zydeco hit. But some of the songs on Can’t Sit Down come not from the zydeco world at all but from unexpected sources, especially “Clap Hands,” penned by the great singer-songwriter Tom Waits. “I didn’t understand Tom Waits at first,” confesses C.J. “But my guitar player is a Tom Waits freak and one day he brought a video of Tom Waits. That’s where I learned to appreciate what he was doing. When I heard ‘Clap Hands’ I said, ‘I like that song. I can do something with that song.’”

Three blues staples bring even more variety to Can’t Sit Down: Joe Williams’ classic “Baby Please Don’t Go,” John Lee Hooker’s “Dusty Road” and Richard M. Jones’ “Trouble In Mind.” Explains C.J., “You gotta add flavor. When I started playing with my daddy, he played flavorful all night. He played blues, some boogie, he played some waltzes. He mixed it up. You put a good blues on there and it’ll energize the rest of the album.”

One last cover song on the album holds special meaning to C.J., Curtis Mayfield’s “We Gotta Have Peace,” which closes the CD. “That song reflects what I’ve been feeling,” C.J. says. “We need peace, we gotta have it. That’s why I have my grandson talking in the beginning, because if we don’t get it together, where is his future?”

Rounding out the album are three C.J. Chenier originals: “Red Shack Zydeco,” which C.J. calls “a true zydeco song”; “Zydeco Boogie,” which he co-authored with an old friend, Wilbert “T.A.” Miller; and “Ridin’ With Uncle Cleveland.” Uncle Cleveland would be Cleveland Chenier, Clifton’s late older brother and the acknowledged master of zydeco washboard. Says C.J., “He’s the grandfather of the washboard. Nobody has the technique he had. My uncle Cleveland used to call me sometimes on Sundays and he’d say, ‘I’m coming to pick you up. We’re gonna take a ride.’ We’d go ride around. He’d always have a half pint of Crown Royale in his top coat pocket. He’d pick me up on Sundays and him and me would hit a club here and hit a club there, and just have a good time.”

Indeed, C.J. Chenier has been having a good time doing what he does for more than three decades. He was still in his teens when he started out, playing in funk bands in his hometown of Port Arthur, Texas. C.J.’s life changed when Clifton asked his son—who had played saxophone and keyboards before picking up his dad’s instrument, the accordion—to join his Red Hot Louisiana Band. “My mother told me that he was always saying that when I get old enough he was going to try to get me in his band,” says C.J. “I never thought it was gonna happen.”

When that time did come, C.J. admits, he didn’t quite “get” zydeco music at first. “I just didn’t understand it. It all sounded the same to me. Until I started playing it. Then I was able to understand what was going on. But every time I heard it my feet were tapping and my head was boppin’. It was such a fun music and the people partied so hard that I fell in love.”

By the time Clifton passed away in 1987, C.J. knew that his life’s calling was to continue his father’s work—not to play the way Clifton did but to bring zydeco into the present. “My daddy always told me to do the best I can do in my style,” he says. “You master what you do. He told me, ‘Be yourself.’ Clifton Chenier already did his thing. I’m trying to just be C.J. Chenier.”

Make no mistake about: C.J. Chenier is a master too, and Can’t Sit Down is surely this master’s masterwork!