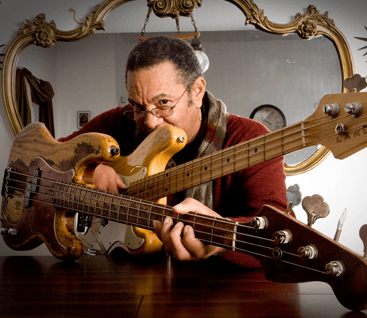 Few bass players in the history of modern New Orleans music are as storied as George Porter Jr. During the course of a career spanning four decades, Porter has not only made a deep impression with his work in the Meters, but he’s notched sessions with artists as diverse as Paul McCartney, Jimmy Buffett, David Byrne, Patti LaBelle, Robbie Robertson and Tori Amos. Early in his career, Porter worked with seminal New Orleans artists like Allen Toussaint, Earl King, Lee Dorsey, and Johnny Adams. Back in 1965, Porter joined on with the Meters, considered by many to be the ultimate fusion of rock, funk and R&B, and gained recognition as one of the scene’s elite bass players.

Porter’s rhythmic work in the Meters in lockstep with drummer Zigaboo Modeliste was epic. Those pockets, the long notes and fat holes, provided the cushion for Leo Nocentelli or Art Neville to play or sing over and created some of R&B history’s most memorable grooves.

Today, Porter features that epic bottom end in his latest collection of Porter Batiste Stoltz tunes. “It’s the ultimate jam band,” Porter says, “one that actually is more musical than just playing everything you know in every song. This band slaps people in the face until they see how good the stuff is!”